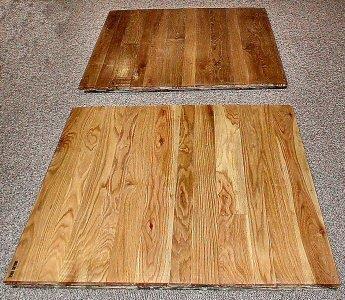 Chinese-made flooring sold in North America has high levels of formaldehyde, according to tests done by the Hardwood Plywood and Veneer Association.

“We went into a retail store and grabbed a sample, tested it and six out of eight flunked,” says Kip Howlett, President of the HPVA, an industry association that represents Canadian and American flooring manufacturers.

When Mr Howlett started testing these floors five years ago, the levels of formaldehyde were so high, he says some were two to three times over the line.

“It was like emissions that we used to see 30 years ago,” he said.

The US state of California has tough labelling and emission rules to control formaldehyde emissions from composite wood products including floors. The US Environmental Protection Agency is expected to soon be putting out proposed rules that aim to regulate this chemical nationally.

In Canada, there are no similar set of rules. Health Canada, the government agency that regulates formaldehyde, said that since 1986 only a voluntary agreement existed between government and industry to limit formaldehyde in wood products. That limit was based on levels set almost 30 years ago, levels that are higher than rules in some US jurisdictions and the European Union.

“If you jack up the amount of resin, it allows you to basically take your production rate on your press and increase it by 50%. So instead of making a million panels you’ll make a million and a half panels.”

In July this year, a lawsuit filed in California against Lumber Liquidators, the biggest flooring retailer in the US, claimed that some of the company’s Chinese-made laminate floors had unacceptable levels of formaldehyde. The lawsuit says there were insufficient warning labels on these products.

According to court documents, plaintiffs tested Chinese-made floors which emitted formaldehyde at far higher rates than those manufactured in Europe or North America.

On average, Chinese products emitted at 350% the rate of European/North American products.

Lumber Liquidators has denied the allegations and said its flooring “meets relevant environmental standards and undergoes rigorous, independent, third-party testing, including those pertaining to formaldehyde emissions”.

The levels of formaldehyde are too low to trigger the need for warning labels under Proposition 65, the relevant California law, but some warnings are provided.

According to Kip Howlett, HPVA’s mandate is the advocacy for, promotion of, and implementation of, product performance standards on behalf of its members.

“We represent our members’ interests to government and provide education and testing to ensure their products meet the highest performance standards,” he said.