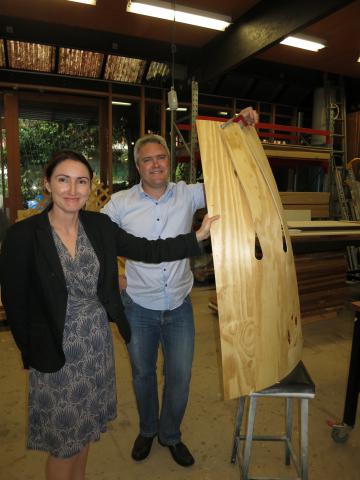 Architects deal with many of the critical issues in today’s society. They push boundaries when it comes to living, investigate new technologies and materials, and help ensure that what we build is environmentally sustainable.

Importantly, they design not just for today, but for future generations.

That is why a Brisbane project by 15 masters of architecture students conducting research into innovative structures at the University of Queensland represent a refreshing new face for engineered wood systems and their application to future building styles.

The research, supported by the Engineered Wood Products Association of Australasia and titled ‘Optimsed Geometries’, looks at using LVL framing in conjunction with plywood and lightweight fabric to build an exhibition pavilion.

Students will design and build the structure over the next two months at the University of Queensland workshops. It will house work by renowned Brisbane contemporary artist Svenja Kratz.

Funding models as well as the cultures and attitudes of university administrators have, in turn, had an undeniable effect on the ability of many schools to provide the best resourcing for the curriculum and the studios they wish to offer their students.

What is clear from the university project is that many schools of architecture, technical teaching and learning needs a strong advocate – particularly for Australia’s undergraduate architecture students who face unprecedented competition and rivalling concerns both within and outside the profession.

The project using engineered wood products has such an advocate in Kim Baber, a part-time lecturer at the University of Queensland’s School of Architecture, who with his wife Monique, runs Baber Studio at West End.

“We are currently proposing that the artwork will be exhibited at an upcoming international architecture forum to be exhibited either at the university’s museum or at Southbank Parklands toward the end of this year,” Mr Baber said.

“This will be part of a collaborative project involving UQ Schools of Architecture, Interaction Design and the Queensland Brain institute. Given the collaborative aspect from three research fields at UQ, it will be promoted widely by the university itself too.”

A win-win for Australian manufactured LVL.

The structure will consist of exposed portal frames made of LVL, with plywood or fabric cladding inside the structure.

There will be an innovative use of LVL applied, through the geometric profiling and jointing of members. The research is being run this semester and students will be evolving the design over the next three weeks and fabricating the pavilion in three to six weeks’ time.

Wesbeam LVL is a high-value engineered wood product made from Australian Forestry Standard certified plantation timbers, much of which is sourced around Perth under a 25-year state agreement.

Wesbeam has provided the School of Architecture project with about 200 lineal metres of LVL with members ranging between 125-200 mm x 35-45 mm.

“The students, ever-conscious of the environment, are pleased to be working with AFS-certified wood,” Mr Baber said.

Since Wesbeam started making engineered wood in 2004, more than 2000 km of LVL joists and beams has left the factory for construction sites around Australia.

In a separate project, the students are researching construction techniques using plywood without stud framing.

“The benefit of using plywood was the layers created by the cross directional grain,” Mr Baber said. “Students introduced three-dimensional geometry to the plywood through processes or folding, cupping and bending, in order to gain inherent stiffness and strength in the plywood.”

The geometry of the structures is closely related to shell structures often found in thin concrete shells such as those designed by noted German architect Frei Otto.

“We were able to produce very stiff and stable structures without the use of additional solid timber and relied solely on the material properties of the plywood,” Mr Baber said.

“Brisbane-based Austral Plywood were incredibly generous in sponsoring the student research by donating the ply. The company is one of the remaining manufacturers of high grade hoop pine ply, a species that is local to Queensland and has a beautiful blonde and clear face, perfect for the exhibition structures.”

The structures were part of the Fish Lane Follies in South Brisbane on August 28 organised by Baber Studio in collaboration with the University of Queensland. 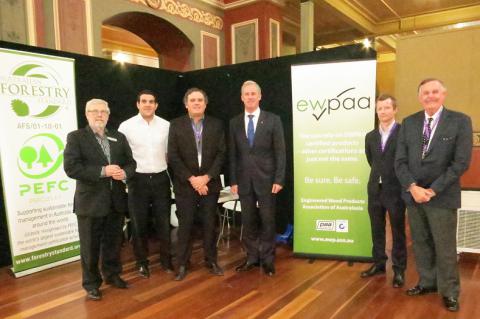