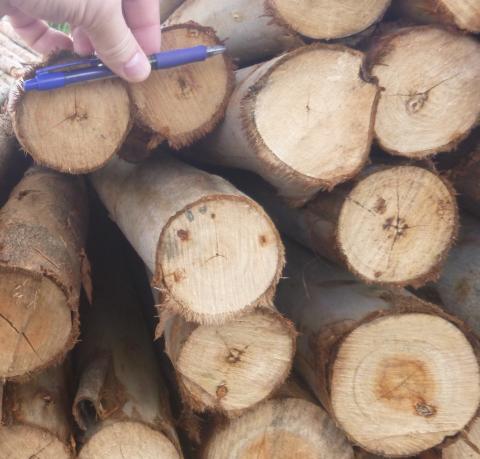 A recent tour of Chinese plywood mills provided participants with an understanding of the wood resource used in plywood production, manufacturing capabilities, as well as typical plywood products available in the Chinese market.

The tour included time in Linyi, known as the ‘wood panel capital’ of China, as well as Shandong Province, north of Shanghai, and Guangxi Province, near the Vietnam border.

“While there are some positive developments in plywood manufacturing technologies in China, the level playing field Australian manufacturers seek is far from realisation,” said EWPAA CEO Dave Gover who took part in the mission. “China has a huge appetite for wood, with logs imported from around the world. There is also increasing interest in growing wood in China,” he said. “Much of what is being used in plywood is sourced from locally-grown eucalyptus hybrids with mean annual increments of 27 cub m/ha – a wood fibre growth rate comparable with some of the best in the world. “Some plantation rotations are as short as five years. “

Chinese veneer mills operating spindle-less lathes consume logs which are considerably smaller than the core that is typically dropped out of an Australian lathe. “Given there is close to 1 million ha of hardwood plantation in Australia, there may well be opportunities to adapt this spindle-less peeling technology for Australian-grown wood and markets,” Mr Gover said. “Fast growth rates, a much shorter rotation, faster return on investment, and technology which can add value to small logs, need to be part of the discussion around forestry investment and processing capability in Australia.”

Of the various plywood mills visited on the tour, the majority were producing an overlaid visual plywood product for furniture, with few mills making a legitimate attempt at producing a formwork product. Pre-priming to reduce the amount of colour variation in the substrate showing through overlays as thin as 0.3 mm was common-place. It appeared that much of the product being manufactured would not comply with AS/NZS 2270, 2271, or 2272 – the Australian and New Zealand standards for interior, exterior and marine plywoods.  Australasian plywood producers typically focus intently on issues of veneer moisture and assembly times to ensure a high quality bond, and their manufacturing lines are configured to afford a high level of control of these important variables.

It appeared that the Chinese industry relies heavily on air-dried veneer, and factory layouts are considerably more disjointed, Dave Gover observed. These arrangements make it very difficult to control moisture variability which is so critical to reliable bonds. The disjointed manufacturing layouts, significant amounts of manual handling and small log resource result in veneers that are shorter and narrower than the finished plywood sheet. The result is a substrate beneath the overlay that is a patchwork of pieces of veneer. Discontinuous layers create a weakness in the final product, particularly when they align through the thickness of the product.

Of greatest concern, was the willingness of some of these manufacturers to put a phenolic paper overlay on this product and misrepresent it as F17 formwork plywood.  Formwork plywood is subject to significant structural demands and requires products to stringently meet their claims. “This sort of product misrepresentation has the potential to cause loss of life in the Australian form working industry,” Mr Gover said. “Film-faced patchwork plywood is not formwork plywood.”

It was clear that workplace health, safety, and environmental regulations are not as rigorous as those governing the Australian industry. Personal protective equipment was rarely worn and there appeared to be a distinct lack of higher order safety strategies, as evidenced by one worker pulling veneer through a guillotine controlled by another – a major amputation risk which would not be accepted in Australian manufacturing.

“A level playing field for Australian manufacturers requires policies which recognise fitness for purpose, compliance with product standards, consistent standards for ensuring the safety and welfare of people, and consistent environmental risk management,” Mr Gover said. “Lack of regulation which should prevent furniture grade plywood being represented as formwork plywood, acceptance of material produced in unregulated or unpoliced work environments, and acceptance of material transported on poorly maintained freight fleets does not constitute a level playing field; regardless of where that material is being produced.

Poor working conditions in emerging economies undermines manufacturing in more regulated environments, and makes the consumer complicit in condoning work practices that would not be accepted here. “Unfortunately, acceptance of these practices results in legitimate producers everywhere being tarred with the same brush as those who lag far behind in terms of acceptable product and manufacturing practices,” Mr Gover said. “Poor manufacturing creates risk of non-conforming building products being used in applications which demand high reliability, thereby creating serious issues for Australian manufacturers and users.

The tour provided great insight into the Chinese plywood industry, including some manufacturing technologies which could benefit Australian industry and major shortcomings in Chinese manufacturers’ ability to meet Australian standards. “The continuous development of competitive forests and technologies, coupled with strong regulatory support for fit-for-purpose products, and recognition of legitimate manufacturing practices, is essential to the ongoing success and competitiveness of forest products and timber construction,” Mr Gover said.